Just over eight years ago I decided to try an experiment: Set up a roaming blog event for the SQL Server world. I was hopeful that it would catch on; I even prefixed the number one with two zeroes in anticipation of someday, maybe, hopefully filling in all three spaces. But honestly, 100 months? That’s a long, long time, especially in our industry.

It’s been quite a ride – 100 posts over 101 months (we actually skipped one month the first year, due to not wanting to overlap with the PASS Summit). Some months, especially recent ones, have been immensely popular, generating 50 or more posts. A couple of months have been a bit more touch and go. But overall I’d call the event quite successful. 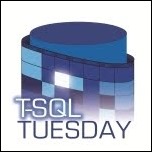 Along the way we got an official logo, Steve Jones created a fantastic archive web site, and the event has not only help created a tremendous number of blog posts, it’s also been cited as inspiration by many new bloggers to whom I’ve spoken. In short, I’m really proud of what I put in motion, and what we—this means you if you’re a blogger—have been able to do together. Thank you for 100 great months!

This is, of course, the invitation for month #100, so let’s get down to business. As I prepped for writing this invitation, I went through the archive and attempted to categorize all 99 prior topics. What immediately became apparent is that our community is extremely concerned, above all else, with professional development. 24 of the 99 topics we’ve seen so far fall into that bucket. For what was initially conceived as a mainly technical series, that’s not quite what I expected. But given the general maturity of the community and data professionals in general, it’s also not too surprising. Things often tend to change slowly in our database world, but we’re always looking for the next big move for our careers.

The last few years has felt like quite a shift with regard to this last point. We’ve seen rapid adoption of such new ideas as public cloud, machine learning, and so on. T-SQL Tuesday topics have also followed these trends; around 30% of the topics over the past two years have been focused on these newer paradigms. When I started T-SQL Tuesday in 2009, no one was talking much about any of these things. We were still really excited about SSDs, just getting into the stride with multicore, and wondering about what cool stuff we might get in SQL Server 2008 R2. (Did we ever answer that final question?)

Anyone who has been in IT for more than 10 minutes knows how the industry works. IT loves its trends, but things tend to be very cyclical. Our current crop of “cloud” technologies are nothing new at the heart of things. The cloud, a wise person once said, is merely someone else’s server. And we’ve seen prior iterations of these same hardware sharing ideas going all the way back to the 1960s. Machine Learning, likewise, has been around in other guises for several years. Columnstore ideas are decades old even if they’re new-ish in the Microsoft space, and even in-memory has a rather deeper history than many realize. None of these “new” technologies about which we’re so excited are actually new, even if they’re newer (and hopefully better) implementations.

It is possible, of course, that a more rapid cycle could break the trend. It is possible that newer technologies will be truly new. Or perhaps the future will simply bring more of the same, a continuation of the everlasting IT sine wave.

Your mission for month #100 is to put on your speculative shades and forecast the bright future ahead. Tell us what the world will be like when T-SQL Tuesday #200 comes to pass. If you’d like to describe your vision and back it up with points, trends, data, or whatever, that’s fine. If you’d like to have a bit more fun and maybe go slightly more science fiction than science, come up with a potential topic for the month and create a technical post that describes an exciting new feature or technology to your audience of June 2026. (Did I do the math properly there?)

T-SQL Tuesday would be nothing without some rules, and a while back I codified them. The important notes with regard to Month 100:

That’s it! Any questions? Let me know. Otherwise, go forth, think, write, and enjoy yourself. See you in another eight years.